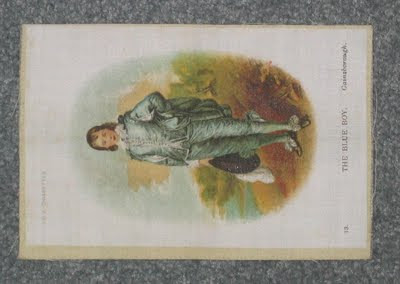 Oh dear!  I can't find a way to turn this right side up.  You will just have to tilt your head.
I last wrote about tobacco silks on April 27.  They were given as premiums in packages of tobacco or cigarettes.  You can read more about them HERE.  Since that time I have bought a few more on ebay, including this one.  This one is large, about 4 by 6 inches, and is a reproduction of a Gainsborough painting.
According to Wikipedia: "The Blue Boy (c. 1770) is an oil painting by Thomas Gainsborough. Perhaps Gainsborough's most famous work, it is thought to be a portrait of Jonathan Buttall, the son of a wealthy hardware merchant, although this was never proved. It is a historical costume study as well as a portrait: the youth in his 17th-century apparel is regarded as Gainsborough's homage to Anthony Van Dyck, and in particular is very close to Van Dyck's portrait of Charles II as a boy."
I am joining ColoradoLady for Vintage Thingy Thursday!
Viridian 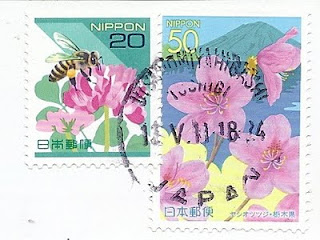 Remember, there is pink under your nose, all around you.  These stamps came on a postcard from Japan that I received recently.  Love the one with classic blossoms and a volcano in the background.

Another Nearly Insane block - this one is block # 36. 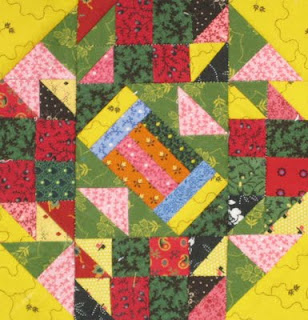 There is some pink, but it's a bit of a dog's breakfast. I think Salinda Rupp was using up her scraps.  Small pieces!  The finished size, remember, is 6 inches square.

I am joining Beverly for Pink Saturday.

viridian
I don't blog about my family or my work. I do appreciate the hard work and blogging by other moms however.